Writing a Unit Test with Jest

In this lesson, we’re going to write our first unit test using Jest and Vue Test Utils. You can get started with the starting code available in this page’s lesson resources, or you can follow along and create the project from scratch using the Vue CLI.

We’ll choose “Manually select features” and click enter so that we can specify which libraries we want to include in our new project. Since we will be learning how to test with Vue Router and Vuex, we’ll select both of those and of course we need to select Unit Testing. This will ****add the appropriate libraries to our project.

In the previous step, Linter / Formatter was selected by default, the next step allows us to customize that feature. For those, I selected ESLint + Prettier, and Lint on save. This configuration is totally up to you for this project.

Because we selected Unit Testing as a feature to include in our project, the next step asks what library we want to use for Unit Testing. We are going to use Jest.

We are going to put all of our configuration in their own dedicated files so you can leave the default here and press enter.

If you want to save this as a preset you can, if not type n and press enter. Our project will then be built for us.

With the project open, let’s start out by looking into the package.json, where we’ll see that Jest and vue-test-utils were installed for us.

What do these libraries do again? As a reminder:

Jest is a JavaScript testing framework that focuses on simplifying your unit tests. Jest will run the unit tests for us and report back to us if the test passed or failed. While Jest is a pretty large framework (there are entire books written on the subject), you will only need to understand a few pieces to write some basic tests.

Vue Test Utils is the official unit testing utility library for Vue.js. It gives us the ability to render our components in our tests and then perform various operations on those rendered components. This is crucial for determining the actual results from a component’s behavior.

Great. We have the proper testing tools installed. But how do we get them to work? Notice this script command within our package.json:

This command essentially looks into the directory called tests / unit and runs the tests we’ve set up in our ComponentName.spec.js files.

If we look inside our tests / unit directory, we’ll find an Example.spec.js file that was created for us. This is a dummy test file that is testing the HelloWorld.vue component in our src/components directory. For now, we’ll ignore what’s written inside that Example.spec.js file and go straight to our terminal and enter npm run test:unit

When we do that, we’ll see that the test within Example.spec.js is being run and it passes.

This is what we’re going to learn how to do by the end of this lesson. We’ll create a new component, set up some tests for it, and run those tests using the test:unit script command.

A new component and testing file

Before writing any tests, we need a component to test. So we’ll delete out the HelloWorld.vue component in src/components and then create a new file called AppHeader.vue, which looks like this:

This component should look pretty familiar because we used it as an example in the previous lesson. It is a simple App Header that displays a Logout button when a user is loggedIn.

Now that we have a component to test, we can head into our test / unit directory, delete out the example testing file and create a new one called AppHeader.spec.js. As you can see in the naming convention here, we are using the name of the component we’re testing AppHeader + spec.js. Spec stands for specification because in this file we are essentially specifying how the AppHeader component ought to behave, and testing that behavior.

Note that these file names must include “spec.js” — without it, they won’t be run when we use the npm run test:unit script.

Identifying what to test

Before we can write tests for our AppHeader.vue component, we need to identify its inputs ****and outputs. Fortunately, we already covered that in the previous lesson.

So our tests for this component are:

Now that we know what we’re testing, we can head into our AppHeader.spec.js file and start writing our tests. First, we’ll need to import the component that we’re testing.

Now we can create our first test block by using the Jest describe() function.

A describe block allows us to group related tests. When we run our tests we will see the name of the describe block printed in the console. As its arguments, describe() takes a string for the name of the component along with a function where the tests will go. It’s worth noting here that if we only have one test we don’t need to wrap it in a describe block. But when we have multiple tests, it’s helpful to organize them in this way.

Now that we have a grouping for our tests, we can start writing those individual tests. We do this by using the Jest test() method. For its arguments, the test method takes a string to define the test and a function where the actual testing logic will go.

TIP: You might also see test blocks that use it() and this will also work because it’s an alias for test().

So our two tests will start out looking like this:

So we have the tests set up, but they don’t do anything yet. We need to add some logic in the body of them to determine if the actual result matches the result we are expecting.

In Jest, we use assertions to determine whether what we expect the test to return matches what is actually returned. Specifically, we do this by using Jest’s expect() method, which gives us access to a number of “matchers” that help us match the actual result against the expected result.

The syntax for an assertion basically works like this:

Inside the expect() method, we’re putting the result itself that we’re testing. We then use a matcher to determine if that result is what we expected it to be. So here, we’re using the common Jest matcher toBe() to say: we expect the result to be true.

If these tests don’t pass, then we know we’ve set something else up wrong elsewhere in our code. So writing this kind of test serves as a form of sanity test for us, preventing us from wasting time debugging our testing code when tests that should be passing are not.

Understanding how to write tests means understanding what matchers are available to you, so take some time to understand the Jest Matchers API.

The Power of Vue Test Utils

Now that we’ve scaffolded our tests, and got them both passing, we can switch out that “sanity test” with the real logic that can perform our given tests:

In order to do this, we need the AppHeader component to be mounted (to check if the button is visible in the DOM or not). This would be quite a process to perform all on our own, but fortunately with the help of Vue Test Utils, it’s very simple because this library comes packaged with mount.

So let’s import mount into our testing file and see what it can do for us.

Above, in each of our tests we’ve created a wrapper const in which we mount(AppHeader). The reason we’re calling it wrapper is because in addition to mounting the component, this method creates a wrapper that includes methods to test the component. Of course, it’s helpful to understand the different properties and methods on the wrapper, so take some time to explore the documentation.

We’re still not performing our actual tests yet, but now we have a wrapper of the mounted AppHeader component, which we can use to write out the complete tests.

In our first test case, we know that by default the user is not logged in (our input is loggedIn: false) so we want to check and make sure the logout button is not visible.

To make assertions on the state of the logout button, we’ll need to get a reference to the button element that is defined in the template. To accomplish this we will rely on two methods available to us on our new wrapper: find() and isVisible(). The find() method will search through our template for a matching selector in order to locate our button, and isVisible() will return a boolean, telling us if that button is visible in our component or not.

For our second test, we want to find the button in the same way, but this time we expect it to be visible, so we’ll say: toBe(true).

Because we are testing the components behavior when we have a user (when loggedIn is true), we need to update that value or else this test will fail. How we do we this? Vue Test Utils to the rescue!

Here, we’re using the wrapper’s built-in setData() method to set our data to fit the correct scenario that we’re testing. Now, when we run our tests in the terminal with npm run test:unit, what happens? Hmm… it’s still failing, and for the same reason. Shouldn’t we have fixed this by updating the data value? What’s going on here?

By changing the loggedIn data value, our button should render to the DOM. But we haven’t told our test to wait for DOM updates to happen before it checks our assertions. So what’s happening here is that our test is running before our button can render to the DOM. So of course our test fails, because our button isn’t yet visible. We need to make our test asynchronous so we can force it to wait for DOM updates. We can do this by harnessing the power of async / await.

We’ll add async just before the callback, and after we set the data, we’ll wait for DOM updates to happen. By using nextTick() we can tell our test to wait for those DOM updates before moving on to the assertion. One way to access nextTick() is by calling it from our wrapper, like so: wrapper.vm.$nextTick()

We’ll add async just before the callback, and after we set the data, we’ll wait for the DOM updates to happen. We’ll await the result of setData.

Now when we run our tests, they both are passing. Phew!

We just covered a lot of steps, as a recap here is what we just did:

Obviously, every component that we are testing is a bit different so these steps may change, especially step 4. Instead of setting the data, we may need to set the props, or simulate user interaction, for example. And we’ll cover more of these test cases in future lessons. 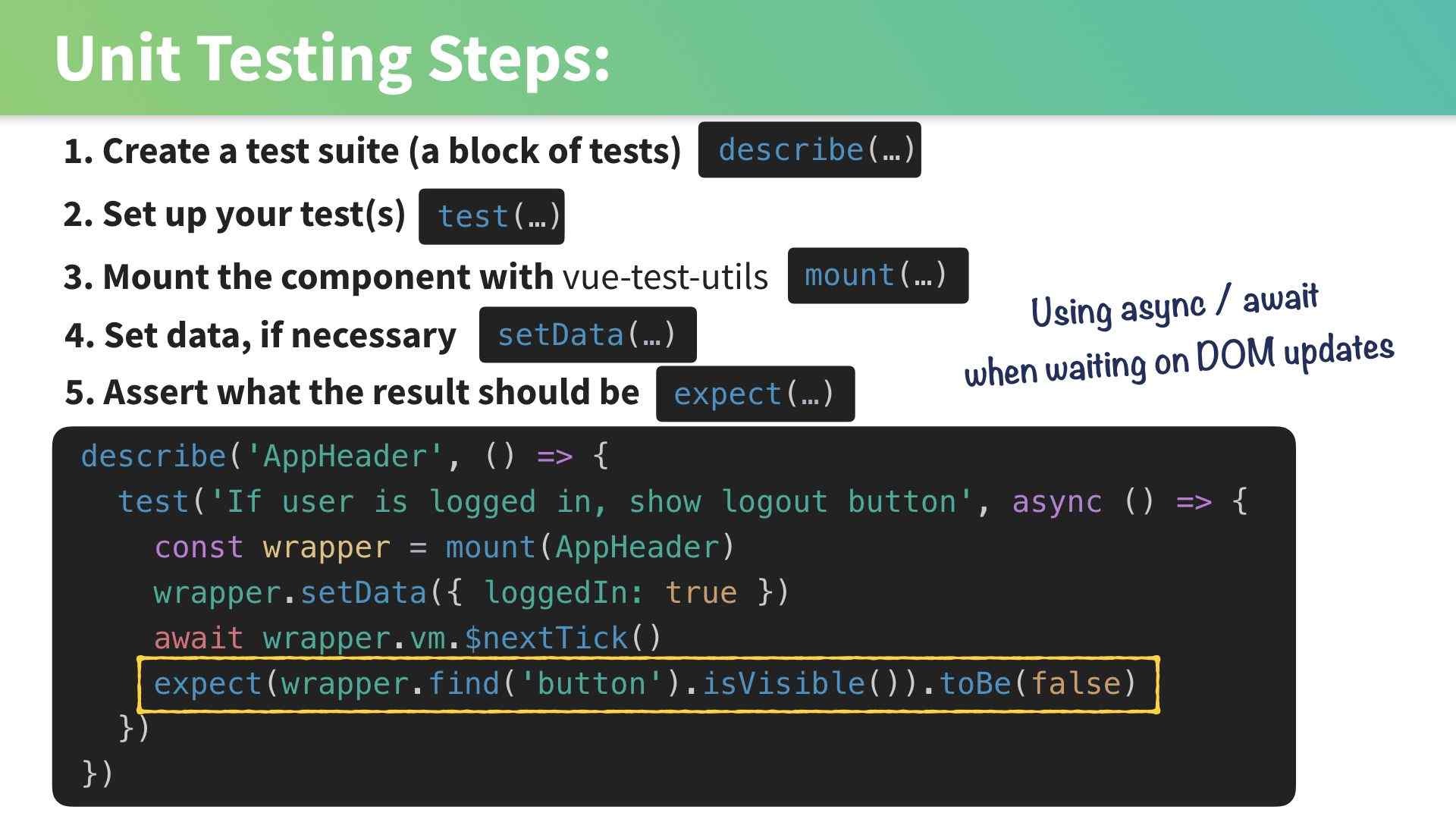