As you probably know,v-model allows us to very quickly and easily capture an input’s value into the state of our application. Every time the user types or interacts with an input, v-model will let the parent know so that it can update our state.

In Vue 3, v-model has gone through a redesign that gives us more power and flexibility when defining how this double binding should be done.

Kicking it off with Native inputs

Let’s start by looking at a native input element.

In Vue 2, whenever you add a v-model declaration to a native input element, the compiler produces a block of code that handles the correct input value and event to be listened to.

This strategy works fairly well, but what if our component uses a dynamic value to set the type of input?

I’m sure you’ve been in a situation where you have created an input component that can either be a type of input for someone’s name, for example, and that with the change of a property you use it as a type email for their email address.

How does it compile?

Because Vue 2 cannot “guess” what type of element this is going to be at runtime, due to the possibility of the data changing at any given time, the Vue 2 compiler is forced to output a very lengthy and verbose block of code to handle every possible scenario. 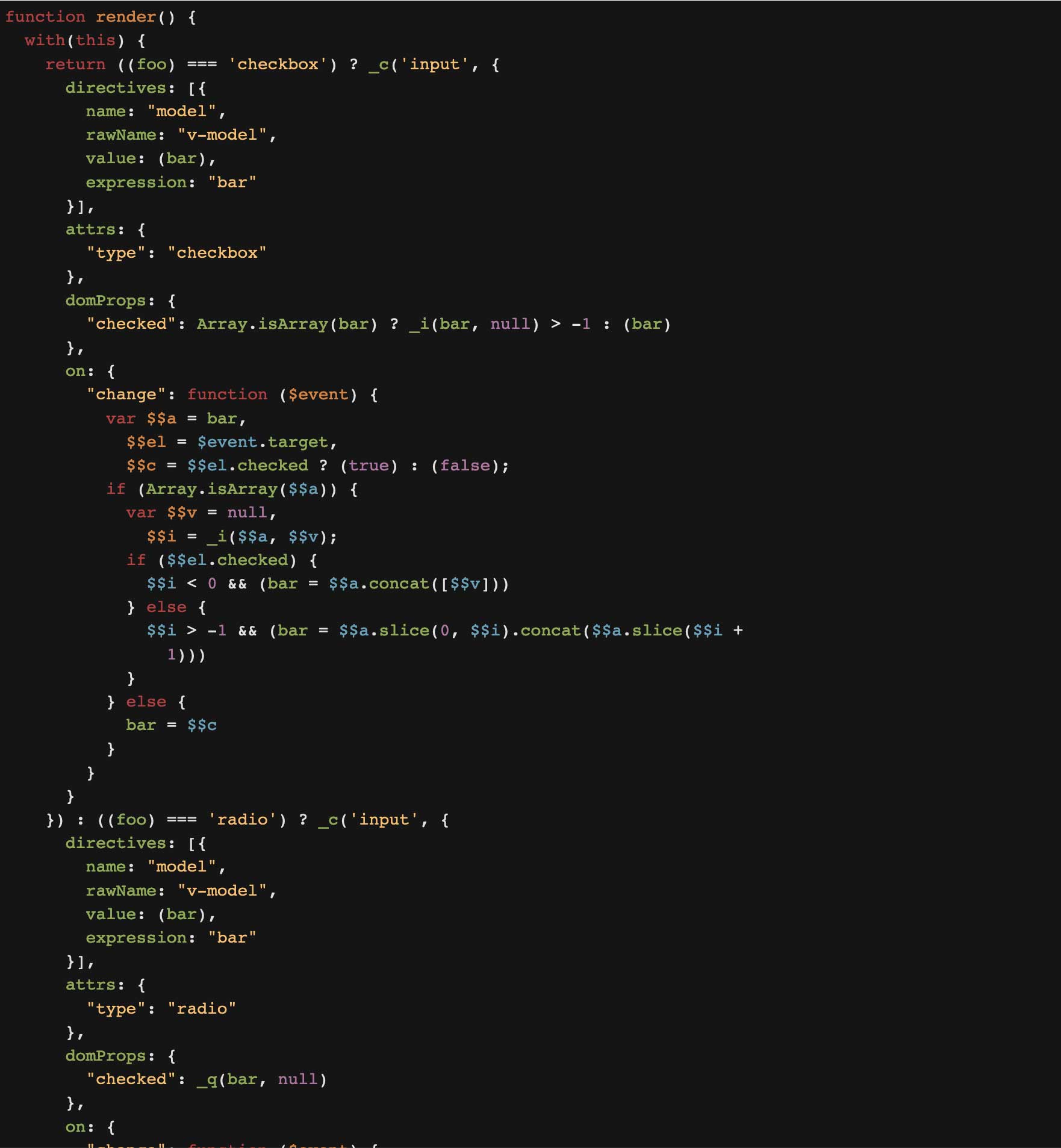 Don’t worry, we don’t need to go over every line of code. Just know that it basically has to prepare for every type of possible scenario.

In Vue 3, outputting this amount of code is no longer necessary because v-model for input elements behaves almost the same way it does for custom components — with an extra module that helps Vue decide which prop/event to apply in each case.

The compiled result in comparison is incredibly smaller.

In Vue 3, when creating a component that has v-model capabilities we need to use a new set of defaults for creating the v-model binding.

In Vue 2, no matter what type of native input you were binding to inside the component you would always bind the value of your data to a value property, and you would listen to an input event.

Of course there was a way to modify this default behaviour by declaring a model property in our Vue component, but that’s the Vue 2 API and we’re not going to look in depth into it.

In Vue 3, we now have two new defaults. For the prop that binds the input of the value, we use modelValue, and for the emitted event we use update:modelValue.

I want you to play close attention to the names of the events before you panic about the verboseness of these new defaults. Did you notice how modelValue is actually present in both of them?

This is going to play a very important role later on in the course, when we look at how to create multiple v-model bindings into a single component!

Now, let’s take a look at how the code of a simple input wrapper component might look with the new Vue 3 v-model syntax.

Now that we have the base for a v-model capable component, let’s take a look at how we would use it in an application.

As with any other component, we need to import it and declare it in the components object for our parent.

Next, we add the component to our template so that we can declare the v-model on top of it. After, we are going to use the object syntax (no composition API this time!) and use a data object to create a simple reactive state.

At this point you’re wondering, we’ll that’s all right and nice, but I already know this!

Fair enough, but I wanted to show you one last thing before we wrapped up our lesson. Using v-model like this is now actually a shorthand! The binding has been modified to now accept an intermediate parameter before the binding.

You’re probably wondering at this point why this is important or actually useful. In the next lesson when we dive into more advanced parts of the new v-model system, we’re going to talk about multi v-model bindings, and this new syntax is going to play a very important role.

Now that we understand the basics of the new v-model system and its improved bindings, let’s go into the next lesson and look at a couple other new tools that it provides us for component development.

We will finally look at the multi v-model capabilities that I’ve been hinting at, and a cool new feature to build our own modifiers.

Can you think of any components in your current Vue 2 applications that will benefit or be able to be enhanced already by these new features?

See you in the next lesson!