In this lesson we will be learning about template compilation & render function.

Why is it useful to know about this?

Rendering our component’s template happens after the reactivity system initializes (which we learned about in the last lesson), and there are two steps: 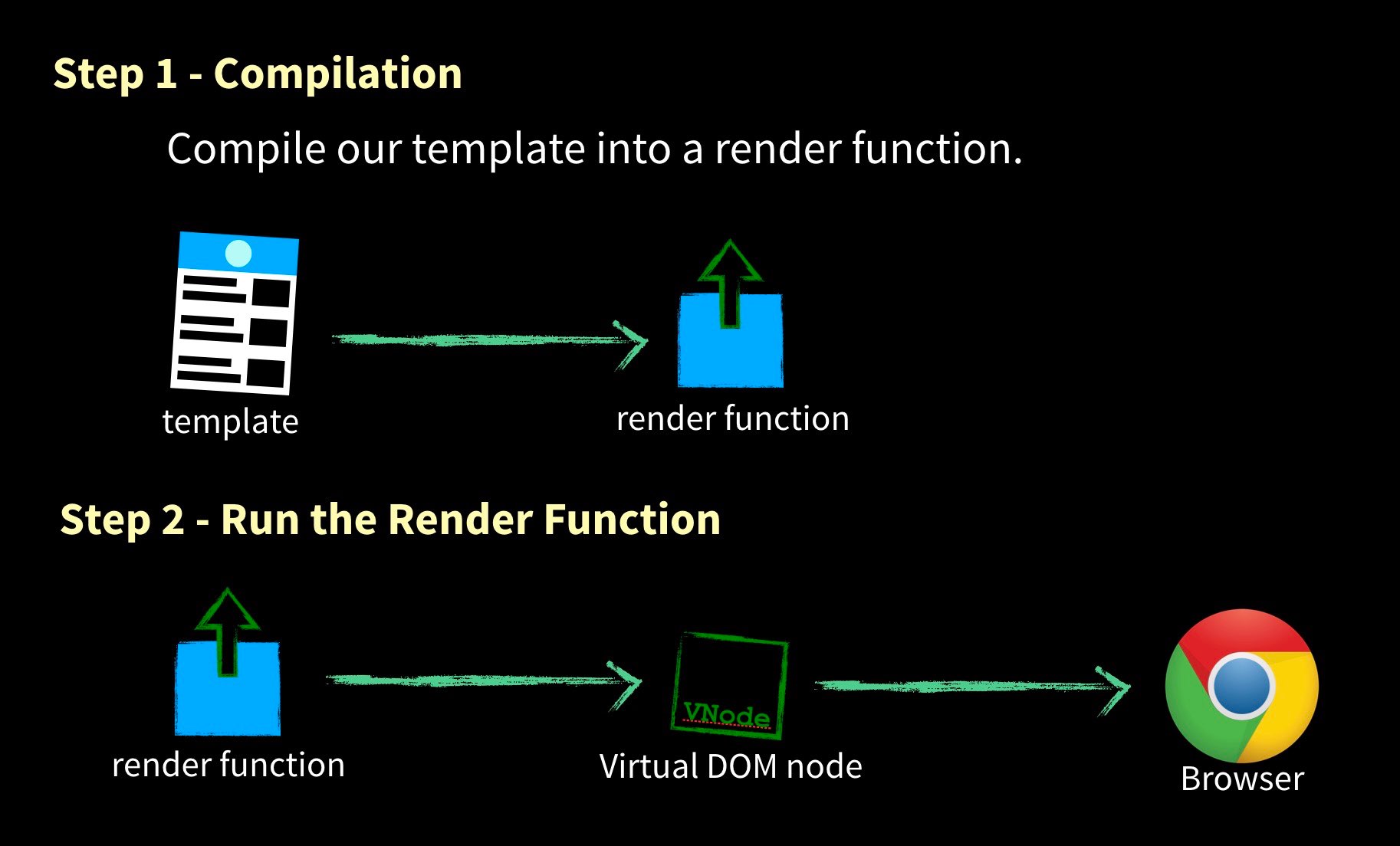 As you see above, if we have a template it will need to get compiled into a Render function.

Whenever we need to render or re-render this component (like when dependencies change) we run the the Render Function.

Each time it returns a Virtual DOM node (Also known as a VNode). This VNode can be used later to create or update parts of the actual DOM.

If you’ve used the Vue CLI v2.x you’ve probably see this prompt before:

What this is really asking is:

For what gets sent to the browser, do you want to include the code that is able to compile templates?

So, if I pick Runtime-only I must put all my templates in .vue files, which will get compiled into render functions at build time.

CLI v3.x defaults to Runtime-only, and doesn’t ask if you want to ship the compiler or not. This makes sense as most production Vue.js applications will compile templates on the server-side for the speed improvement.

This leads to our next question:

What does a render function look like, what is a VNode, and what is this Virtual DOM thing?

You might already know this, and feel free to skip this section if you do. The DOM or Document Object Model refers to our browser’s interface (API) to change what gets displayed on the screen. Each HTML document is a series of nodes (like below) that we can manipulate using code which then updates what the user sees.

When we run the following code against the webpage, what happens?

When we run this JavaScript we use the DOM API to get all the elements with the h1 tag, get the first one [0], and set the textContext value of that node to New Heading . This updates the DOM and what gets shown in our browser changes.

DOM trees can be huge and have thousands of nodes. Luckily we don’t have to run low level commands on the DOM anymore. We have frameworks (like Vue.js) that call this DOM API under the hood.

However, even with frameworks doing the heavy lifting searching and updating our DOM with thousands of nodes can be slow. This is one of the reasons the Virtual DOM was created. This is not unique to Vue.js, many frameworks have the concept of the Virtual DOM.

What is the Virtual Dom and what does it look like?

The Virtual DOM is a way of representing the Actual DOM, but with JavaScript objects. It’s a simpler abstraction of what we want to build onto our webpage. As you can see below, our html can be represented by a JavaScript object, also know as a virtual DOM node (or VNode): When we’re ready to insert this into the actual DOM for the first time, our framework (Vue) knows how to take VNodes (like the one above) and very efficiently build actual DOM elements.

Later if a piece of data changes (like our text) it could trigger our render function to run again, creating another VNode. Vue then knows how to diff the new VNode from the old VNode and make updates to the actual DOM in the most efficient way possible. 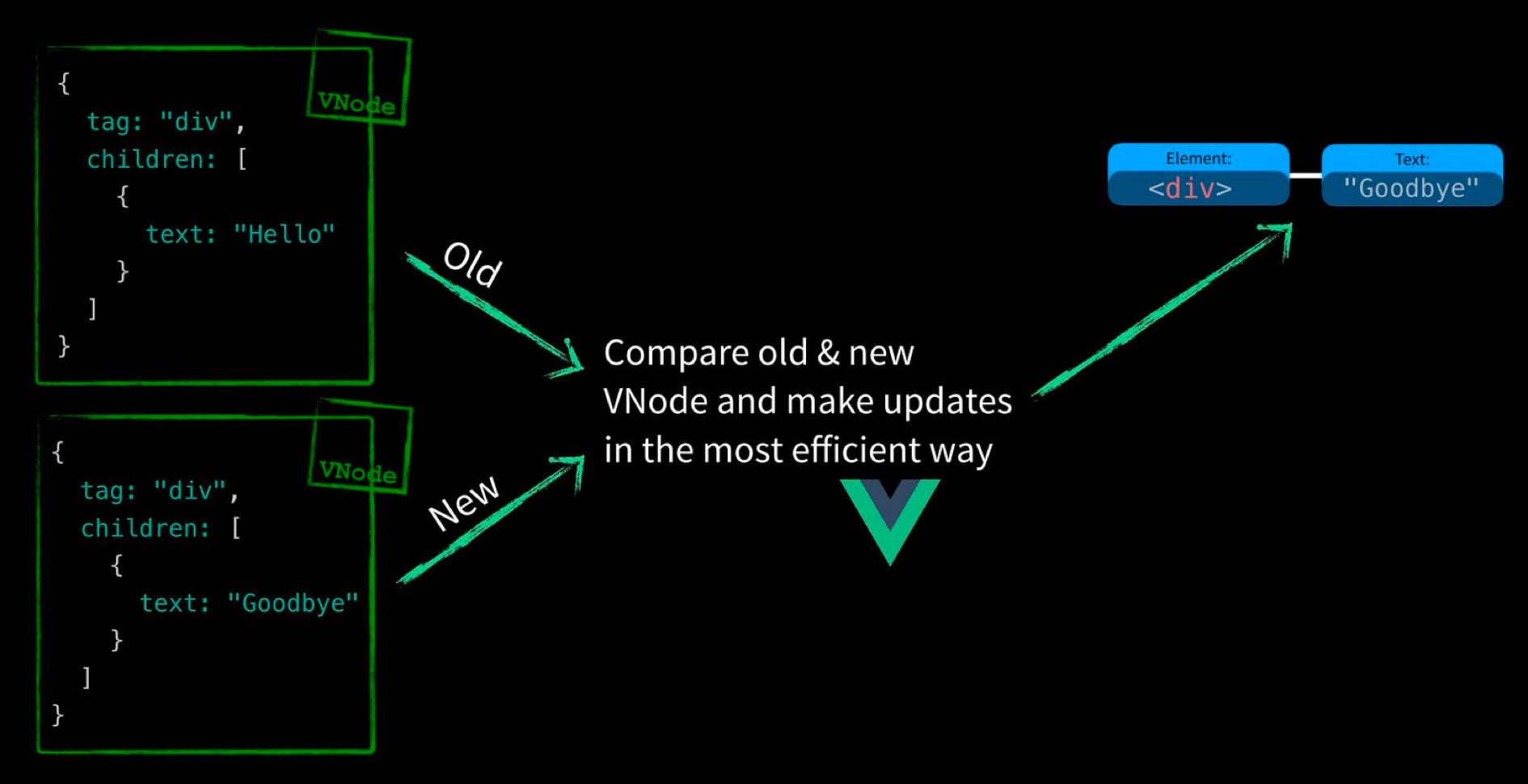 The Blueprints to our Building

You can think of the Virtual Dom as the blueprints to our building (the actual DOM).

When we change some data on the 29th floor of our building, like moving the furniture around and adding a new kitchen island, we have two options:

Obviously, I want to do the minimal amount of work, the latter.

Walking through an App

If we have the following code:

When this render function is called, it returns the following JavaScript object (or VNode)

How can we create our own Render Function

One of the ways Vue.js is flexible is by letting us create own render functions (instead of using a template which gets compiled). We might have a component that looks like this:

Notice we defined our render function. It called createElement(‘div’, ‘hello’) which returned a VNode that looks like this (when you remove all the extra null properties):

Another way you might see this render function written is:

When you’re working with a virtual DOM, it’s a common convention to alias createElement to “h”, which really just stands for Hyperscript. You may already know that HTML stands for"hyper-text markup language," and in this case “Hyperscript” stands for “script that generates HTML structures.”

When does the VNode get inserted into the DOM?

Well, we first initialize our Component it goes through these steps:

Now with the proper lifecycle hooks, this looks like: 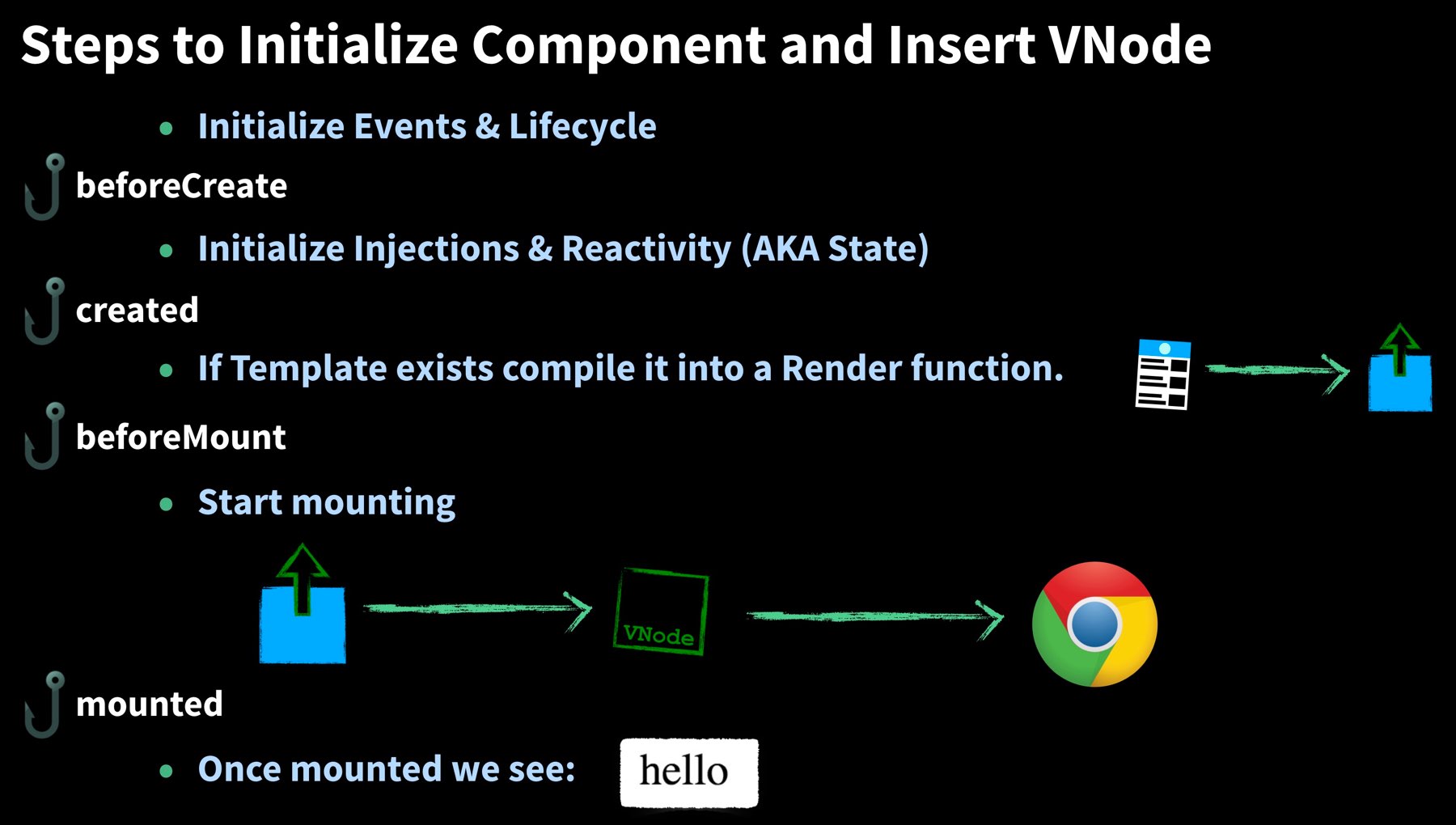 Mounting with Reactivity and Rendering

Remember in lesson 1 when we watched this code for reactive properties?

In the Vue lifecycle.js codebase we find:

So if we are rendering with reactive data, here’s how it all starts to work together:

If we already have the component loaded onto the page, and we change the reactive data, like on the console, here’s what we see:

This image should make a little more sense now, this time with annotations. 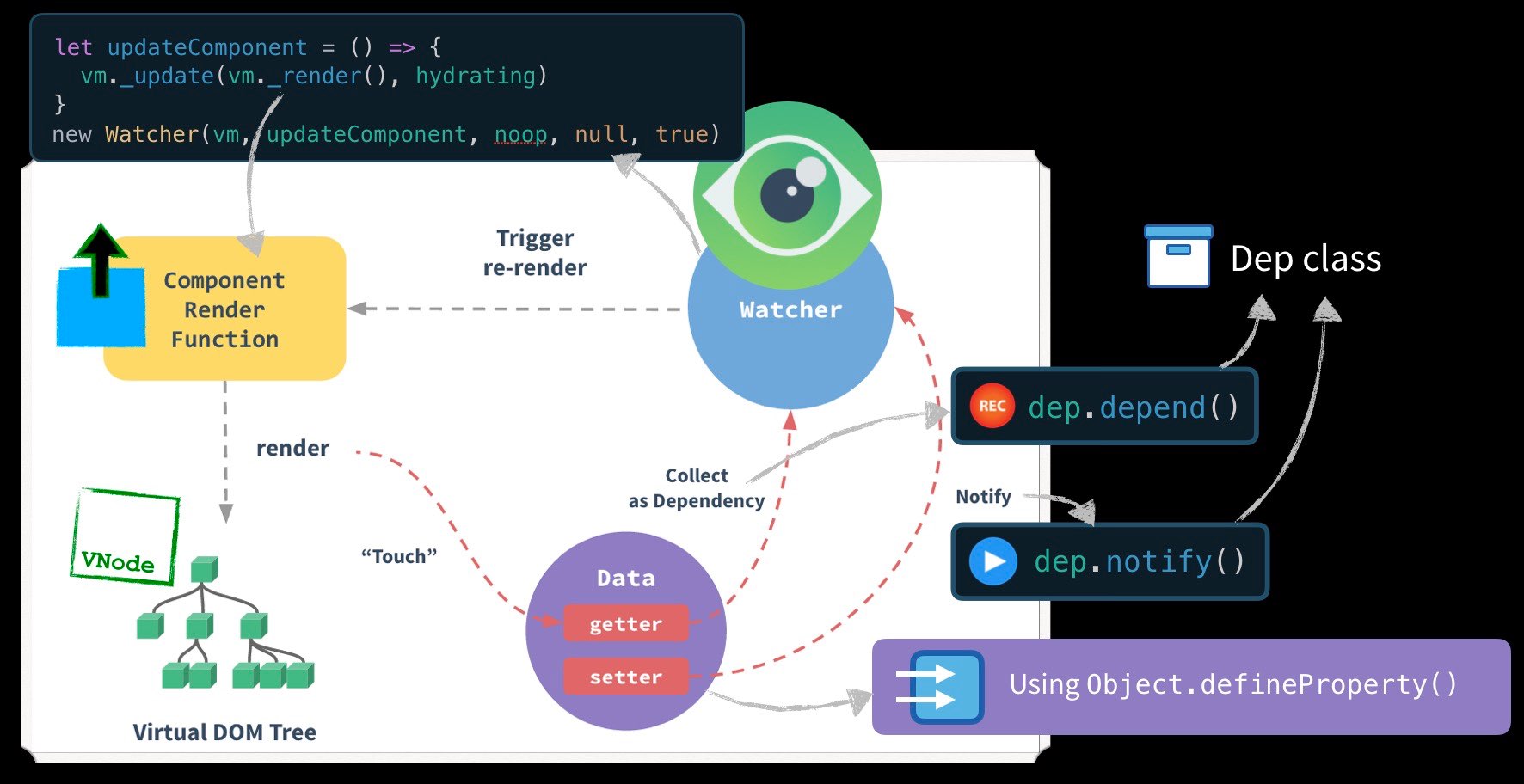 Notice how it’s the render function that is triggered by the Watcher when one of the reactive properties gets changed. Do you see how the Component render function returns the Virtual Dom Node? Yes it says “Virtual DOM Tree”, our VNode could have a tree of nodes as children, so it’s not wrong.

There’s lots of creative ways to leverage the power of the render function, and our trusty h method. Here are a few simpler examples:

As you can see, if the second parameter is an array, it’s children nodes.

What do you think this would render?

The second argument has now become a data object where we can send in attributes that we would use in a template. The third argument just creates text. The Vue docs detail all the options you have in this data object.

If you’re coming from the React world you might already be familiar with JSX. It’s a preprocessor that adds XML syntax to JavaScript. With the help of this Babel plugin you could use JSX to write a render function like:

If you prefer this type of syntax for writing templates, now you know how!

As I mentioned at the start of this lesson, one use-case for using the render function is when you run into a limitation with the template engine. In the Vue documentation they walk through the following problem:

Problem: I want to have an <h#> tag, with the # being supplied out of the database.

Using what we know so far we can easily use a render function to dynamically output the tag.

And we get exactly what we’re looking for, now with a dynamic tag name. Definitely check out the documentation to see the full use-case.

Sending in a Component to Render

Sometimes we may want to render a component inside our render function. If we send an object into the first argument of our “h” function it will automatically treat that object as options for a component. Like so: