This course was created with Nuxt 2.3.4. Please check the Nuxt docs if you run into any issues using a newer version.

Back in lesson 3 we discussed what it means for Nuxt to run in Universal Mode. To review, once we have our application hosted on the Internet, here’s what it’ll look like when we start sending requests:

Notice that the page we’ve requested gets rendered on the server (Server-Side Rendering), and the resulting index.html is sent to the browser where it loads and displays even before Vue is started up. Once Vue is started up our application gets “Hydtrated” and goes into normal SPA (Single Page Application) mode: 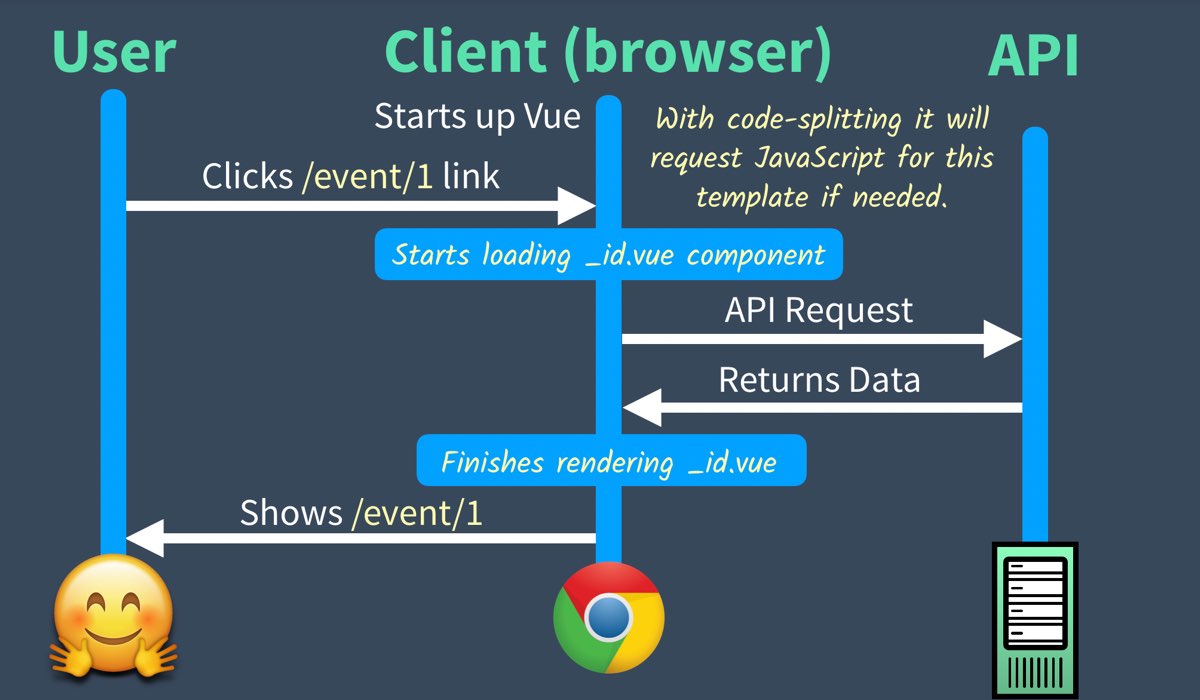 This is how our application will be working once we deploy it. However, first we need to move our API server into the cloud.

Up until now we’ve been using JSON-SERVER to mock out our API locally. That’s not going to work if our server is on the internet. We need to move our API server onto the Internet.

If this website was called Laravel Mastery, Rails Mastery, Firebase Mastery, or Node Mastery we might teach you how to create a complex API server. Those are all great solutions for building an API, which you’ll want to use for a production level app. However, since this is Vue Mastery we’ll use a Typecode project called my-json-server, which lets us create fake online APIs.

All we have to do is have a github project with a db.json. We can use ours for our project:

We’ll use the organization (Code-Pop) and the repo name (real-world-nuxt), in a URL we’ll construct on my-json-server:

Try going to that URL, and you’ll find a link to fetch our JSON events from the db.json file, and you can even access individual events.

Perfect. To make this work with our application we only need to change one piece of code:

All we have to do is change the baseURL, and now if we run our local server, it’ll work except now using our API on the Internet.

Before we deploy our application it’d be good to ensure it works locally in production mode. This is a two step process.

Nuxt builds your application, running it through various webpack configurations, taking all your nuxt.config.js configuration into account, and finally building a very streamlined bundle that is appropriate for production.

After running nuxt build you’ll find that the .nuxt directory, a hidden directory, has been generated and has everything that you need to run Nuxt as a server side application.

Next we’ll run our Nuxt application in production mode using node by running:

This runs a node server in production from our /.nuxt/dist directory using the files it generated there. Unlike the development server if we make a change we’ll need to build and start the server again.

In this lesson we’ll focus on deploying your application. We’ll review how to deploy your Nuxt application to a server, and the tools that Nuxt gives you to help with that.

Nuxt can be deployed on any server that can run Node. Our server needs to be able to run:

To effectively install the dependencies, build our project using webpack, and start the node server in production mode.

Heroku is one of the few hosts that you can deploy and run a node server completely free, that’s why I chose to use it for this tutorial. We’ll be deploying using the following steps:

You can follow these instructions to download and install the Heroku CLI. Once installed we need to create our application on Heroku. We do this with heroku create:

Notice Heroku gave us back two things. First is the URL where our application will be deployed (when we deploy it), and the second is the git repo we need to push our code into which will trigger Heroku to deploy it.

We need to tell Heroku to install the devDependencies of the project (to be able to launch npm run build) so we’ll run this from the command line:

Also, we want our application to listen on the host 0.0.0.0 and run node in production mode:

After this initial setup, we need to tell Heroku to run npm run build via special command in the package.json file called heroku-postbuild.

Next, Heroku uses a what’s called a Procfile (a file literally named Procfile with no extension) in order to execute and run your application. The contents of the Procfile should contain the following:

This will tell Heroku to start your application and to direct external HTTP traffic to it.

Finally, we can push the app on Heroku with:

Customizing your app build with nuxt.config.js

Nuxt and webpack give you lots of ways to customize and tweak the way your application is deployed. Inside the nuxt.config.js file you’ll find two configuration options you might want to learn about.

There is the build property which lets you customize the webpack configuration for how your application is built. You can tweak things like webpack loaders & plugins, minify, filenames, and directory output. There’s also the server property that lets you define the server connection variables for your application, like port, https, socket, and using the timing API.

To learn more about the build and server inside the Nuxt documentation.

In this lesson we moved both our API and server onto the Internet, and learned about deployment in Universal Mode. In the next lesson we’ll review static generation, another deployment mode.